The clouding of the normally clear eye lens can be likened to looking through a fogged up window. What once appeared white becomes yellowed. Poor night vision, double vision and even sensitivity to light are cataract symptoms too.

By age 80, more than half of Americans either have a cataract or have had cataract surgery, according to the National Eye Institute, the governmental authority dedicated to research human visual diseases and disorders. Seventy percent of Caucasians are reported to have cataract by age 80 compared to 53 percent of Blacks and 61 percent of Hispanics.

While most cataracts develop with age, cataracts can also be caused by trauma, genetic disorders, radiation, and past eye surgery. Some babies are born with cataracts, Diabetes can increase risk of cataract as well as long-term use of steroids, alcohol, smoking or prolonged exposure to ultraviolet sunlight.

The lens of the eye is where cataracts form. It’s behind the iris, the colored part of theeye. The lens focuses the light that passes into your eye, producing clear images on the retina which is the light-sensitive membrane in the eye that functions much like film in a camera. The lenses of eyes become thicker, less transparent and less flexible with age. Tissues within the lens break down and clump together, clouding the lens. Over time the cataract blocks the light, preventing the clear images from reaching the retina. That results in blurred vision.

Fortunately cataract surgery is generally a safe and effective procedure. 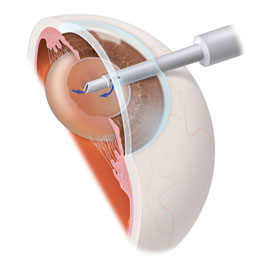 The surgery is performed using a local injection or topical eye drops with intravenous sedation. Patients usually do not require general anesthesia. 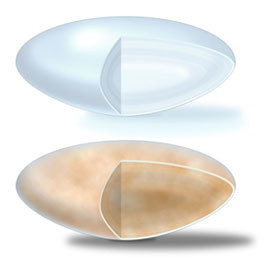 The cloudy lens in removed from the eye and an artificial, clear, plastic lens is implanted in its place. 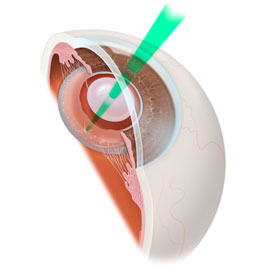 Post-surgical treatment of any cloudiness of the supporting membrane is performed in the office within minutes.

Cataracts continue to worsen, so the above are all temporary measures until such time the patient can have surgery

Cataract surgery is done under a microscope. The cloudy lens is removed using a phaco-emulsifier which uses ultrasound waves to dissolve and vacuum the lens out. (Lasers are not used in cataract surgery). The incision is less than 3mm long and it seals itself. After the cataract is removed, a lens implant is unfolded inside the eye. After cataract surgery, the thin capsule or membrane which supports the intraocular lens can become cloudy. If this occurs, a laser can be used to dissolve the cloudy membrane. This procedure only takes a few minutes and can be done in the office. No anesthesia or post-operative restrictions are needed. 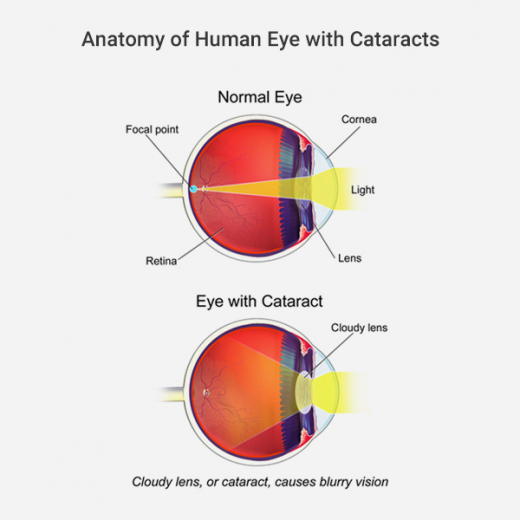 The Causes of Cataracts include: